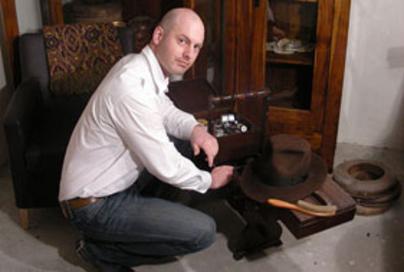 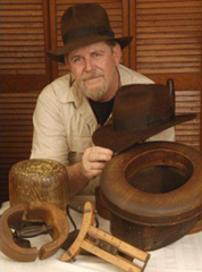 Made to Measure, Built to Last

Adventurebilt Hat Company was chosen to make the famous and iconic brown fedora for Harrison Ford in Indiana Jones and the Kingdom of the Crystal Skull. We also made Harrison's gray fedora as seen in this new film.

We worked directly for Mr. Bernie Pollack, Harrison Ford's personal costume designer. Bernie was given the task of recreating the iconic costume, 19 years after the last Indy film.

Many of the original suppliers were long gone, most having retired. This included Richard Swales, the man who supplied the earlier film hats of the Indy series.

We worked closely with Bernie, presenting him with various Indy fedoras with various crown heights, brim widths and creases. He narrowed it down to what he thought looked good on Ford. A filmed costume test was done, our hat was chosen, and we were given an order for 36 hats. We made 11 specifically for Harrison(9 brown ones and two gray). The rest of the order were for Harrison's stunt doubles. We used the highest quality felt, made from Canadian beaver fur, and the hats were so durable that Bernie told me he had enough left to make another film. We always thought Indy should be wearing a tough hat, and we were allowed to finally put him in one. The wooden blocks used to create the hat were created by me, and replicated in the various sizes by Richard Lamode, a fine blockmaker from Mn. What we made for the new film is definitely a one of a kind fedora. Very 1930ish in appearance. Tall crown, wide brim, with the original ribbon used on the Raiders fedora.

I say "we" because Adventurebilt Hat Co is comprised of two guys. There is me, Steve Delk, the founder of the Adventurebilt Hat Co. and then there is my friend and partner Marc Kitter of Adventurebilt Europe. I asked Marc to join me a few years ago because we both shared a passion for the Raiders fedora, and his attention to detail was as important to him as it was to myself. He joined me in the quest of recreating the Raiders fedora, as at that time, it was impossible to find this hat from other hatters. The block used to create that hat was lost to time.  We spent a few years learning how to hand make hats, just for ourselves, and later offered them for sale a little above cost to the numerous really picky Indy fedora fans. It was our hobby, not a business. The call we got from Bernie changed all of that.


Overnight we went from hobby hatters catering to a very small group of astute fans, to professional hatters, recognized by other hatters. And for that we have to thank Peter Botwright of Wested Leather. He is the guy responsible for making most of the other film jackets. It was Peter who received a call from Bernie in regards to making the new Indy jacket, and Peter referred Bernie to Adventurebilt, largely due to the good name we had among the die hard Indy fans. And of Peter's friendship with Marc.  So thanks Peter for thinking of us

We want to publicly thank Bernie Pollack for being such a great guy, and for entrusting this iconic brown fedora to us. This hat was much more than just a hat to Marc and I. It was our life, and our passion. And thank you so much Bernie for allowing us to be a small part of the Indiana Jones film history.   You are the best!

A NOTE TO POTENTIAL CUSTOMERS

Adventurebilt hats are handmade. Just like the hats made by the master hatters in the small hat shops of the early 20th century. This is the kind of fedora that we made for Indiana Jones and the Kingdom of the Crystal Skull. Handmade hats are therefore not massed produced, and involve a "wait" once you place your order. You will generally wait for several months on one of our hats, just like Bernie Pollack, Harrison Ford's personal costume designer had to wait on the 38 hats we provided him for Harrison and his stunt doubles. But what impressed Mr. Pollack will probably impress you as well, and we feel our fedoras are well worth the wait, as do hundreds of our customers.

We understand that the wait time and price of our handmade fedoras may not be your cup of tea. Therefore we have available now for sale, a factory made version of the handmade fedora. The price is much less, and the wait time if minimal. I think this new factory Everyman fedora will set the standard in the future for factory made hats. We were very detail oriented when developing this hat with one of the finest hat factories in the world.

You may order, or enquire of this hat using the link www.penmanhats.com